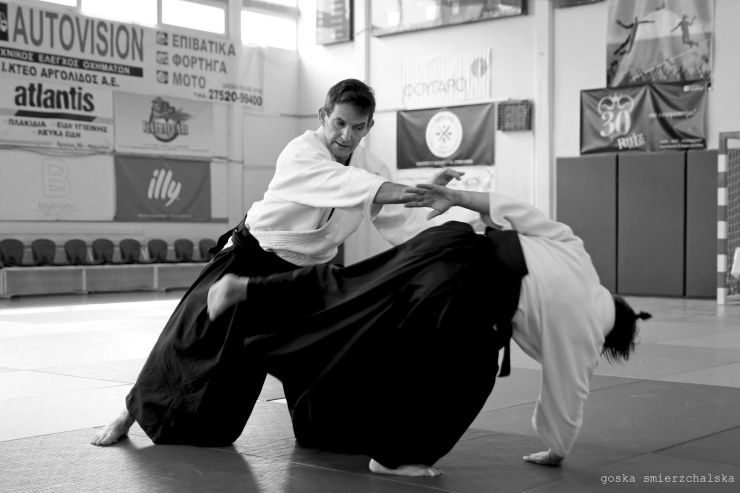 Eamonn Devlin sensei started Aikido in 1982 at the Trinity College Dublin dojo in Ireland under Ken Gannon. Moving to the UK in 1985, he continued training under Chris Mooney. While in the UK, he was fortunate to be able to participate in many of the British Aikido Federation national seminars. Teachers teaching in these seminars included Yokota sensei, Kanai Sensei, Ikeda Sensei, Hosokawa Sensei, Fujita Sensei, Sekiya Sensei and Yamaguchi Sensei.

From 1986, with the formation of the United Kingdom Aikikai, he practiced under the technical direction of Sensei K. Chiba. Also, in 1986 he visited Greece for the first time. As a result, he participated in some of the earliest Aikido seminars at the Athens Polytechnic dojo with C. Mooney Sensei, M. Kanetsuka Sensei and T. Ezra Sensei.

In 1990 Eamonn Devlin sensei moved to Greece and started an Aikido group at the historic Budokan dojo in Ambelokipi. In the following years, the early 90’s, the Aikido of Athens dojo under his direction, organised many seminars in Greece. Some of the invited senseis were K. Gannon, C. Mooney, N. Chiesa and J. Nour. Furthermore, he collaborated with the Greek Aikido Federation in the organisation of seminars with M. Kanetsuka Sensei and T. Ezra Sensei.

He has taught at seminars in Spain, France, Ireland, Italy, and the U.S. In addition to Aikido, Eamonn studies Tenshin Buko-ryu Heiho (TBRH) naginata jutsu with Ellis Amdur shihan, within which he holds the rank of okuden.

Eamonn Devlin Sensei is the General Secretary of the Aikikai of Greece Federation and a member of the Technical and Grading committees.